The Peace in “Quiet.” 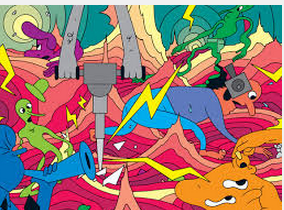 It was a cold rainy Sunday as I was browsing through the web seeing if I could find anything interesting to read. I often like looking at the New York Times to get a sense of what the masses are thinking. And to my surprise I stumbled over this article. This article hit close to home, as I am in the business of hearing loss prevention.  Our company Custom Protect Ear makes personal hearing protection that’s fights against noise and noise pollution in both everyday and work environments. Hearing Loss Prevention is our business.

“And nothing disrupts thought the way noise does, Schopenhauer declared, adding that even people who are not philosophers lose whatever ideas their brains can carry in consequence of brutish jolts of sound”.

So, I share this article with all of my friends, colleagues, subscribers, contacts and customers. This article does an excellent job in depicting the raw affects of everyday noises and it impacts our thought process. Our world has become so filled with noise pollution that we as humans may have forgotten what “quiet” is.

The findings were clear: even when people stayed asleep, the noise of planes taking off and landing caused blood pressure spikes, increased pulse rates and set off vasoconstriction and the release of stress hormones. Worse, these harmful cardiovascular responses continued to affect individuals for many hours after they had awakened and gone on with their days.

As Dr. Wolfgang Babisch, a lead researcher in the field, observed, there is no physiological habituation to noise. The stress of audible assault affects us psychologically even when we don’t consciously register noise.

Loud Sounds can be Debilitating

In American culture, we tend to regard sensitivity to noise as a sign of weakness or killjoy prudery. To those who complain about sound levels on the streets, inside their homes and across a swath of public spaces like stadiums, beaches and parks, we say: “Suck it up. Relax and have a good time.” But the scientific evidence shows that loud sound is physically debilitating. A recent World Health Organization report on the burden of disease from environmental noise conservatively estimates that Western Europeans lose more than one million healthy life years annually as a consequence of noise-related disability and disease. Among environmental hazards, only air pollution causes more damage.

A while back, I was interviewed on a call-in radio station serving remote parts of Newfoundland. One caller lived in a village with just a few houses and almost no vehicular traffic. Her family had been sitting in the living room one evening when the power suddenly cut off. They simultaneously exhaled a sigh of relief. All at once, the many electronic devices around them (including the refrigerator, computers, generator, lamps and home entertainment systems and the unnatural ambient hum they generated and to which the family had become oblivious) went silent. The family members didn’t realize until the sound went off how loud it had become. Without knowing it, each family member’s mental energy was constantly diverted by and responsive to the threat posed by that sound.

Where does this leave those of us facing less restrained barrages? Could a critical mass of sound one day be reached that would make sustained thinking impossible?

Is quiet a precondition of democracy? The Supreme Court justice Felix Frankfurter  suggested it might just be.  “The men whose labors brought forth the Constitution of the United States had the street outside Independence Hall covered with earth so that their deliberations might not be disturbed by passing traffic,” he once wrote. “Our democracy presupposes the deliberative process as a condition of thought and of responsible choice by the electorate.”

The quiet in Independence Hall was not the silence of a monastic retreat, but one that encouraged listening to others and collaborative statesmanship; it was a silence that made them more receptive to the sound of the world around them.

Most likely Schopenhauer had in mind a similar sense of quiet when he chose to live in a big city rather than retiring from society: apparently he, too, believed it important to observe as much of life as possible. And when he moved to Frankfurt, he didn’t bring earplugs. He brought along a poodle known to bark on occasion, and the flute he loved to play after writing. Most people who are seeking more serenity from the acoustical environment aren’t asking for the silence of the tomb. We just believe we should be able to hear ourselves think. Read Full Article:

This article clearly illustrates that “the scientific evidence shows that loud sound is physically debilitating”. This is not common knowledge to most people. Sound and noise affects everyone who is exposed. Depending on the length of time and pitch of the noise – exposure can cause damage.  Unless we intend on living away from civilization– silence is something that is very hard to achieve. However, if we are aware of the surrounding noises that affect and shift our mental state then we like Schopenhauer can enjoy our time and environment with tools that allow us to drown out the unnecessary debilitating noises.

I encourage all of you to share this article with your circles.