2018 Olympics- be prepared and protected!

Well, it looks like the Olympics are in full swing ahead.  The 2018 Winter Olympics, officially known as the XXIII Olympic Winter Games, more commonly known as PyeongChang 2018, is an international multi-sport event currently being held from 9 to 25 February 2018 in Pyeongchang County, South Korea, with the opening rounds for certain events held on the eve of the opening ceremony—8 February 2018.

Pyeongchang was elected as the host in July 2011, during the 123rd IOC Session in Durban, South Africa. It marks the first time South Korea has hosted the Winter Olympics, and the second Olympics in the country overall after the 1988 Summer Olympics in the nation’s capital, Seoul. 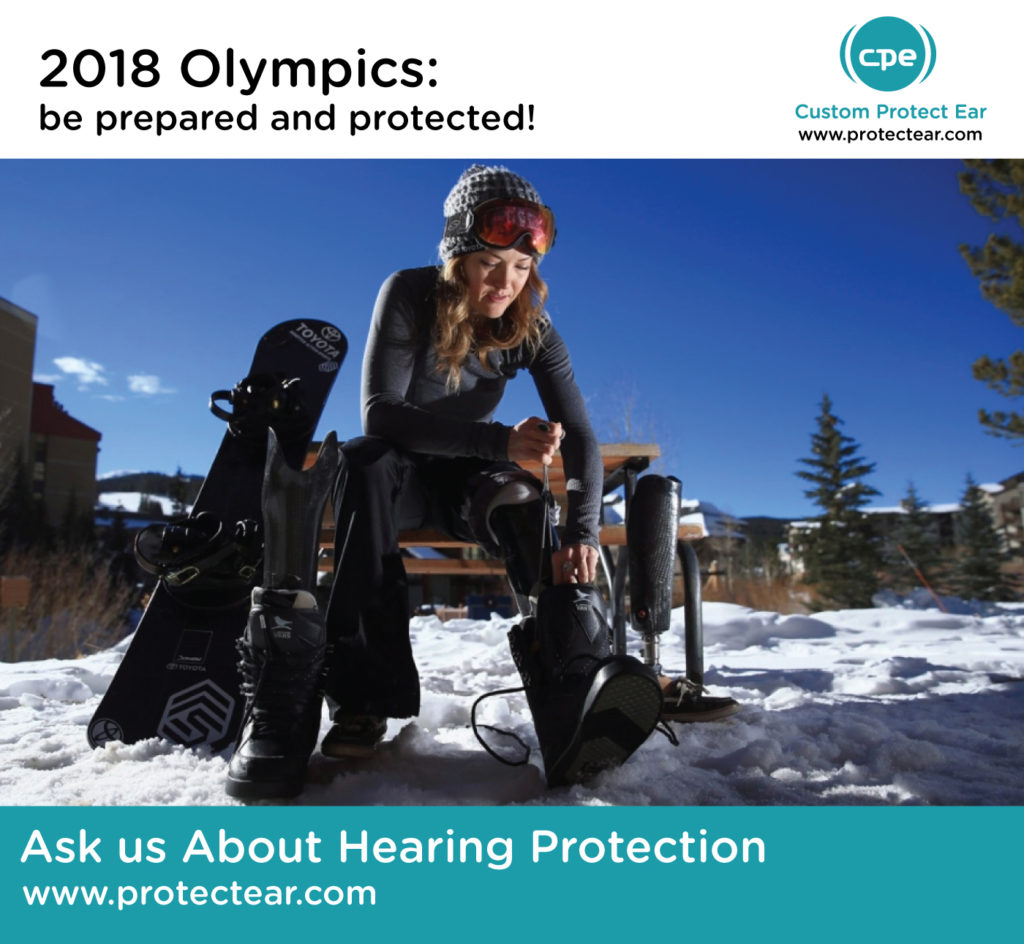 Protection Against Hearing Loss at the 2018 Olympics

With exposure to observing great athletes also puts spectators at risk of damaging their hearing from the noise in the stadiums. In previous Olympic games “officials have admitted that noise levels in the stadia have regularly been over 100 decibels, with the boxing arena hitting 113.7db during a fight involving Irish boxer Katie Taylor.” Exposure to loud noise above 85 decibels over time can cause permanent hearing damage and with the closing ceremony fast approaching, the decibel level is sure to be much higher.

The Olympic Committee and its advisors urge Games revelers to pack earplugs, which can protect your hearing by keeping loud noises out without shutting out other ambient noises.

“Action on Hearing Loss Audiologist Gemma Twitchen said: “With crowds going wild for Team GB, noise has been recorded at levels in excess of 100db, which is much louder than a jet engine taking off, in fact, it’s 10,000,000,000 times louder than the smallest sound your ears can hear!“A night in a noisy crowd could cause temporary tinnitus – ringing, whistling, humming or buzzing in your head or ears – or permanent hearing damage. This is not something you’d want to take home as an everlasting memory from the Games.

“You wouldn’t think twice about standing close to a jet engine without hearing protection, so we’re urging people going to the closing ceremony or any of the events in the Olympics and Paralympics to take the very simple step of using earplugs.”

Amongst all these festivities and test of personal willpower and strength we always want to remember some of the challenges athletes have overcome and endured significant hearing loss challenges in the previous Olympics.

Before his successful career as a figure skater, Adam Rippon had to overcome several health issues in his early years. He was born with an eye infection and 80 percent hearing loss, and he also suffered from a severe respiratory condition and burst appendix. Fortunately, surgery was able to restore most of his hearing, and he recovered from the other illnesses. Adam will be in competing in PyeongChang as one of three men on the U.S. figure skating team.

About of bacterial meningitis at age 19 resulted in Amy Purdy’s legs being amputated below the knees and the removal of her kidneys and spleen. The disease also led to hearing loss. Despite these challenges, Amy has pursued her passions, including dancing, modeling, and snowboarding, for which she designed her own prosthetic leg. She won a bronze in the 2014 Paralympic Winter Games and will be competing once again in the 2018 event.

Another athlete born with hearing loss, Elena Yakovishina is a downhill skier from Russia who hasn’t let her disability keep her off the slopes. She wears hearing aids while she competes, which she says improve her balance and help her perform better by hearing the wind and the skis. Hearing aids also helped Elena hear the cheers of her home crowd when she competed in the 2014 Winter Olympics in Sochi.

Orlandi is said to be the first deaf athlete to compete in the Olympic Games. The boxer was a gold medalist in the 1928 Olympic Games. In 1929 he turned professional, and in the 1930s he held both the Italian and European lightweight titles. He was born a deaf-mute.

The 24-year-old WNBA star was born with a hearing loss and incredible athleticism. She has completed 15 seasons in the WNBA, and she has earned WBNA Finals MVP honors as well as the Reynolds Society Achievement Award. The world-famous Massachusetts Eye and Ear Infirmary in Boston give this award annually to an individual who has overcome hearing, vision, or voice loss and who have distinguished themselves and provided inspiration to others.

Float was the first person to win the gold medals in both the Deaf World Games and the Olympic Games. In 1977 he won 10 gold medals at the 13th World Games for the Deaf in Romania. In 1984 he became an Olympic champion at the Olympic Games in Los Angeles. And he was the first deaf Olympian to openly display the universal ILY (I love you) sign on the pedestal during his medal ceremony at the Olympic Games.The first deaf swimmer to win a gold medal, Float recalls to Sports Illustrated the moment that changed his life: “It was the first time I remember hearing distinctive cheers at a meet. I’ll never forget what 17,000 screaming people sound like. It was incredible.” At 13 months old, Float contracted viral meningitis and consequently lost his hearing. He’s 90 percent deaf in his right ear and 65 percent in his left. He now wears digital hearing aids.He learned to read lips, but he was teased by the other kids at school because of a lisp. He tells SI, “Kids would boost their self-esteem by putting me down. Swimming gave me the self-confidence I couldn’t find anywhere else. Besides, my name isn’t ‘Field’ or ‘Court.’ It’s ‘Float’ — I had to swim.”